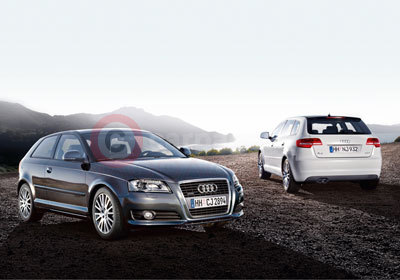 The Audi A3 moves with the times this week as a new generation of the market leading premium hatchback range focusing even more acutely on economy and emissions control opens for UK order priced from £14,995 OTR.

Set to reach its first customers in July, the latest line-up is equipped with wholly new or revised engines delivering reductions in CO2 emissions of up to 15 per cent, paring back the output of the 1.8 TFSI S tronic model, for example, from 179g/km to 153g/km. More immediately apparent benefits for three-door and five-door Sportback models also include subtle, A3 Cabriolet-inspired styling revisions inside and out and a clearer equipment structure with sophisticated new options including Audi magnetic ride adaptive damping.

The styling enhancements extend to the potent 265PS S3 quattro, which also becomes available for the first time in five-door Sportback form.

All four petrol engines powering the revised A3 line-up, the majority of which combine sophisticated FSI direct injection with turbo charging, have been modified with a view to maximising efficiency. The TDI range also builds on its reputation for outstanding frugality and takes a major stride forward in terms of refinement through the adoption of the all-new 2.0-litre TDI unit with common rail piezo fuel injection first seen in the new A4 Saloon.

Available in 140PS and 170PS forms, with the 140PS version expected to be the most popular overall in the range, the impressively muted new unit replaces the familiar 2.0-litre pump jet injection engine, and brings significant gains in economy and a reduction in CO2 emissions of as much as 15 per cent. As an example of its positive impact, the combined fuel economy figure for the A3 2.0 TDI 140PS climbs from 52.3mpg to 55.4mpg, while its CO2 output falls from 143g/km to 134g/km.

As before the TDI range will also contain the most economical and efficient model in the line-up - the 105PS A3 1.9 TDI e - which in standard trim retains an impressively low CO2 output of 119g/km despite the addition of manual air conditioning as part of the latest range improvements.

A six-speed manual transmission is common to all versions bar the five-speed 1.9 TDI, and in all front-wheel-drive models except the 1.9 TDI can be replaced at extra cost by the much praised S tronic dual clutch transmission (formerly DSG). In the quattro four-wheel-drive camp, the A3 2.0 TFSI quattro will be available in S tronic form only, while the 2.0 TDI quattro (170PS) and S3 quattro will continue to be offered only as six-speed manuals.

The foundations for the latest generation A3 models are provided by the familiar McPherson strut front and four link rear suspension that has brought control, composure and agility to the range since its 2003 launch. For the first time, though, the set up can be enhanced at extra cost in selected versions by the high-tech Audi magnetic ride system already used by the TT and R8 sports cars.

The fluid in the Audi magnetic ride system’s sophisticated dampers contains magnetic particles that can be influenced by an electromagnetic field. When a voltage is applied to the system’s electromagnets, the viscosity of the fluid is altered by the affected magnetic particles, so resistance to damper movement can be increased to iron out pitch and roll when necessary, or reduced when ride comfort takes precedence.

The renowned quattro four-wheel-drive system, offered in conjunction with 2.0-litre TFSI petrol 200PS and 265PS engines and for the 2.0-litre TDI 170PS unit, has also evolved in this latest generation model. Its central hydraulic multi-plate clutch now responds even faster when the engine's power needs to be redistributed between the front and rear wheels to maximize stability and traction.

As before, the new generation A3 range model structure begins with standard specification, and is followed by the comfort-oriented SE and performance-focused Sport and S line trim options, but there are revisions at every level. Standard specification has been enhanced by the addition of manual air conditioning at no extra cost, and the content and pricing of the SE and Sport upgrades has been adjusted to make these options more attainable.

The SE model, for example, builds on its standard counterpart’s equipment with a multi-function leather-rimmed steering wheel, a front centre armrest, a Driver’s Information System, front fog lamps and special 16-inch alloy wheels. It now carries a premium of £650 over the standard model, a reduction of £1,350 compared with the previous SE specification.

At the head of the range, the S line specification, including a unique front and rear bumper design, new 18-inch alloy wheels and S line interior equipment, is the only A3 trim line to be available in the UK in combination with the new option of Xenon Plus head lamps with LED strip daytime running lights. These striking new distinguishing features are fitted as standard to the S3.