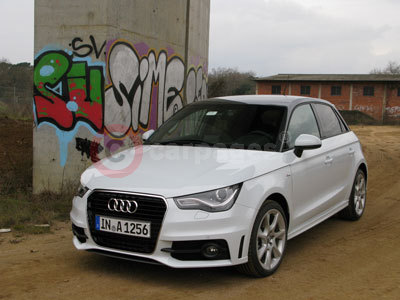 Just after the millennium Audi had a car range consisting of 17 models. Now it has a line-up of product that is more than double that number. The arrival of the Audi A1 Sportback has pushed the range of cars that wear four interlinked rings on their badges to a list of 41 models. No other car maker has mushroomed its product base as rapidly as that in a similar time-scale. Audi is well and truly on a roll, with more yet to come.

The A1 Sportback is particularly significant as the car that will introduce the marque to a whole new group of customers who might not have considered buying an Audi before. Although the Audi A1 has been on the road since 2010, the fact that it was initially only offered as a three-door model inevitably limited its appeal for families and others looking for greater practicality than a coupe-style car offers.

So this new five-door version of the smallest Audi model makes the A1 a much more interesting proposition for far more people to consider. It has an identical ‘footprint’ to its three-door Hatch stablemate: it has the same wheelbase at just under two and a half metres, and it is the same length at just below four metres. Compared with the three-door A1, though, the five-door is very slightly higher and wider, it measures an extra 6 mm in each direction. The reason for this is the A1 Sportback’s roofline which stays higher further back than that of the Hatch, and with shorter front doors the handles have shifted further forward to the widest part of the body.

Compared with the A1 Hatch, the A1 Sportback weighs about 25 kg more and it is priced £560 above its three-door sibling. The extra doors widen the car’s appeal and make it more attractive to female buyers and families. For anyone living in an urban area, the optional seven-speed dual clutch S tronic auto transmission may be of interest.

It is no surprise that the A1 Sportback drives very similarly to the Audi A1, as the two cars are virtually identical under the skin. The international launch for the Sportback was staged in Girona, northern Spain, and on a mixture of roads from smooth-surfaced motorways to heavily pock-marked rural back roads, the Sportback behaved itself creditably. It feels a very grown-up small car. It has tidy road manners and feels composed and responsive.

The 1.6 litre turbodiesel engine in this version pulls strongly but needs to be kept on song by using the gears to keep the revs up in the right range. This is because the five-speed gearbox has ratios chosen with good economy in mind, an engineering decision that is vindicated in the car’s good mpg and CO2 figures, but it does mean that you have to work the gearbox to keep the performance lively.

In almost all versions except the most basic, the A1 Sportback comes with fuel-saving standard top-start, so the engine cuts out when you pause in traffic or at the lights.