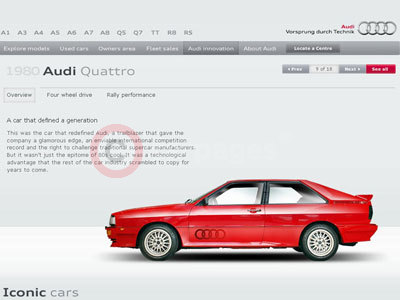 Audi fans can now take a trip down memory lane through the brand's 100-year history with the new heritage section on the Audi website. Visitors to the site can take in the sights of iconic Audi cars, observe Vorsprung durch Technik in action, re-live the thrills and spills of the brand's motorsport record, and explore how four companies became one.

The 'heritage showroom' takes visitors through the brand with four rings' star-studded line up of iconic cars - from the foundations laid by the 1913 Audi Type C and its market-leading handling and performance (it could develop up to 35PS) - to the trailblazing Eighties quattros and the brand's first production supercar, the 2007 Audi R8.

The Audi Vorsprung durch Technik DNA is laid bare in the innovation gallery, which features key future-shaping developments such as quattro all-wheel drive, which began life as the drivetrain on the original quattro car. When applied to competition cars, quattro led the brand to dominate the World Rally Championships of the Eighties to the point that the car was banned from competing.

Browsers can also read about the brand's long-time development of aluminium, which started with the all-aluminium bodied NSU 8/24 in 1913, made a come-back as the main body material of the first generation Audi A8, and is now a permanent part of chassis structures across the Audi range.

Setting The Pace In Motorsport

Audi has been on winning form in motorsport since Horch won the Alpine Run in the Audi Type C (nicknamed 'Alpensieger' - 'Alpine victor') at its first attempt. Accolades have been won in diverse competitions ever since - from the the quattro's decade of dominance in rallying to the nine titles clinched in the 24 hours of Le Mans series, eight of which were thanks to TDI technology that has been honed and tuned on the track.

Users can also explore how the four component companies - Horch, Wanderer, DKW and Audi - became Audi and created the strong tradition of pioneering technology and design that has seen it rise from humble beginnings to being a leading premium car manufacturer.