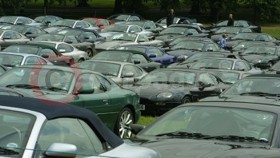 To celebrate the 10th anniversary of the launch of Aston Martin’s classic DB7 the company hosted a special celebration on Sunday (July 6) with around 400 owners driving from all over Europe to Buscot Park stately home and gardens in Oxfordshire.

Amongst the cars on display were some very early examples of the six-cylinder DB7 first produced in 1993 when the model received international acclaim at its world premiere at the Geneva International Motor Show. Alongside this were various examples of the 12-cylinder Volante and Coupe models launched in 1998 culminating in the latest 2003 versions – the DB7 Zagato and the DB7 GT.

The Aston Martin DB7 is one of the world’s most famous and exclusive sports cars and since its introduction it has become the most significant Aston Martin model of all time. It also resurrected an Aston Martin tradition of naming models ‘DB’ (after one of the company’s former owners, David Brown) which had not been used since the early 1970s.

In its entire 89-year history, Aston Martin has only ever made 19,000 cars of which nearly 7000 are DB7 models. Every Aston Martin model is handbuilt at Aston Martin’s purpose-built facility at Bloxham in Oxfordshire. In recent years more than 1000 examples have been produced annually.

Ian Minards, General Sales Manager for Aston Martin, said: "It was a truly special day. The Aston Martin DB7 has become such a significant car for the company and this day was a fantastic opportunity for customers to meet up and celebrate their ownership of one of the world’s most beautiful sportscars which has now become a major icon in the automotive world.

"Buscot Park was the perfect setting to host this event and our guests were free to wander around the beautiful gardens and visit the eighteenth century Italianate house where they could view paintings from the Faringdon Collection including examples of Rossetti, Rembrandt, Murillo, Reynolds and Burne-Jones."

This is a 19-year+ news article, from our Aston Martin archive, which dates back to the year 2000.

If in doubt check with your local Aston Martin dealer as car prices and technical data will have changed since 2003.