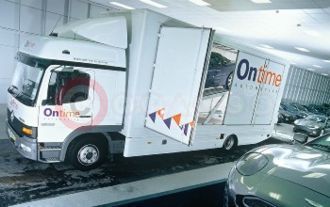 Ontime Automotive, which provides bespoke vehicle preparation and distribution services for the industry’s prestige manufacturers, has marked the end of an era by transporting the last ever Aston Martin DB7.

Ontime has handled European distribution for Aston Martin since the early 1980s and became a global, tier-one supplier in August 2001. Since then, the company has distributed to markets worldwide, forming a seamless link between the Aston Martin production line and the global dealer network.

"From production line to dealer, Ontime’s operations are vital to our global supply chain. We have worked successfully with the company for nearly a decade."

Launched in 1993, the DB7 became the most popular Aston Martin yet. The company produced over 7,000 at its factory at Bloxham, near Banbury, Oxfordshire. The car’s successor, the DB9, is the first model to be produced at Aston Martin’s new, state-of-the-art manufacturing facility and headquarters at Gaydon, Warwickshire, where all future Aston Martins will be made. Ontime also services the Aston Martin factory at Newport Pagnell, near Milton Keynes, Buckinghamshire, where the Vanquish is currently built.

The indoor storage facility, which was purpose-built to service Aston Martin’s requirements, cars are kept in a clean, temperature-controlled and humidity-regulated environment, with their batteries constantly charged. Up to 100 cars can be stored, though the number on site at any given time is kept as close to zero as possible, reflecting the efficiency of the distribution operation.

After inspection, the Aston Martins are delivered by Ontime to dealers around the globe. To keep them in pristine condition, Ontime uses covered transporters for deliveries to dealers in the UK and continental Europe, while the cars are carried in closed sea freight containers for delivery to the rest of the world, including North America, the Middle East, Far East and Australia.

The company runs a further 230 open transporters, with capacities of up to eight vehicles, for volume distribution. Responding to trends in the premium sports car market, recent investments in the fleet include engineering modifications to accommodate lower, wider cars. Ontime is also the owner-operator of six Ro-Ro vessels.

In addition to handling pre-delivery preparation and worldwide distribution for Aston Martin, Ontime distributes every Honda, Ferrari and Maserati in the UK, as well as the storage and worldwide delivery of every Bentley. Other prestigious clients include Lotus, Morgan, DaimlerChrysler and BMW Alpina. The company moves 700,000 vehicles a year, with operations ranging from high-volume distribution to individually driven vehicles.

Aston Martin DB7 Images may not be UK specification cars. Colours and exterior and/or interior elements may differ from actual models.