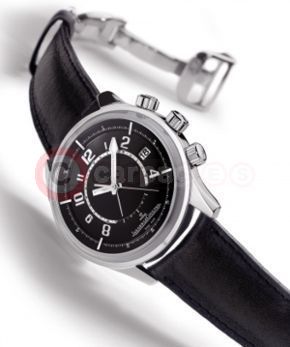 Two of the most significant names from the worlds of horology and the car have joined forces to produce the ultimate watch for the enthusiast.

It houses precision engineering in a design inspired by the past and revives a link between the two companies that goes back more than 70 years. The dashboard of the giant killing 1.5-litre Aston Martin LM from the 1930s – a regular class winner in international motorsport including Le Mans – was dominated by Jaeger instruments.

Speaking at the launch of the partnership held at the new Service Centre of the Paris dealership, Auto Performance, on Wednesday, 22 September, Dr Ulrich Bez, Chief Executive of Aston Martin, said: "Aston Martin and Jaeger-LeCoultre share many philosophies. Each company has a rich heritage and both are dedicated to producing the finest hand-crafted designs in their respective fields.

"The partnership between Aston Martin and Jaeger-LeCoultre is a true celebration of a common goal: perfection."

The Aston Martin Jaeger-LeCoultre places a contemporary twist on a traditional theme. Its case, hands and functionality - alarm, date and moveable outer bezel - reflect the past. But the colour of the dial, the high tech titanium case and the layout of the digits, which are arranged in a sweep of 270 degrees rather than a conventional 360 degrees, give it a contemporary look.

The Aston Martin Jaeger-LeCoultre will be produced in strictly limited numbers. Just 750 examples of the Titanium Edition will be created, featuring a titanium case, metallic grey dial – similar to those used in Aston Martin cars - with a single stitched dark brown leather strap. The strap will be produced from Bridge of Weir leather, as used in the interior of the V12 Vanquish and the DB9.

Aside from the unusual sweep of the digits, the watch face echoes historic Jaeger-LeCoultre counters, with particular reference to the font type and size used for the numerals. Its exclusivity is confirmed by an engraving on the case-back uniting the names of Aston Martin and Jaeger-LeCoultre.

It is the first in a number of limited edition watches to be created by Jaeger-LeCoultre for Aston Martin.

Jaeger-LeCoultre has a history of timepiece engineering stretching back more than 170 years. It was in 1833, in the little village of Le Sentier in the Swiss Jura mountains, that the chronicle of Jaeger-LeCoultre began and the company has been at the forefront of horology ever since with a number of notable firsts to its name.

One such is the crown winding system which eliminates the need for a winding key and which was invented more than 150 years ago by Antoine LeCoultre himself.

Aston Martin is a remarkable British company that can trace its origins back to 1914 when founders Robert Bamford and Lionel Martin named the first car in honour of Martin’s competition successes at the Aston Clinton hillclimb. The current Aston Martin V12 Vanquish and DB9 combine state-of-the-art technology with designs of stunning beauty… an epithet that applies equally to timepieces from Jaeger-LeCoultre.