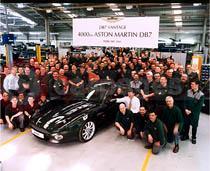 The Aston Martin DB7 has strengthened its position still further as the most successful model ever to be produced by Aston Martin. Production of the 4000th DB7 on February 16 - a Galloway Green Vantage Coupe moves total DB7 production ahead of the combined total achievement of the DB4, DB5 (James Bond) and DB6 models.

All Aston Martins continue to be built individually to the exact specification and requirements of every customer. During the past 12 months DB7 models have been supplied in almost 100 different body colours while almost 50% receive further enhancement through the Aston Martin Works Service Division at Newport Pagnell. It is unique for a particular specification ever to be repeated, but on this occasion and at the express wish of the owners, who are brothers living in Northern Ireland, the 4000th DB7 has been built so that it is identical in every respect to DB7 - 3999.

Such is the continuing demand for the DB7, and the Vantage in particular, that plans are already in place to exceed the record 1000 Coupe and Volante models produced last year. With customer interest in the V12 Vanquish about to be translated into confirmed customer orders, there is every prospect that the current year will see records tumbling at both Newport Pagnell and Bloxham.

Last year impressive new sales records were established throughout the world. Worldwide sales of new Aston Martin totalled 1021, an increase of more than 40% on the previous record total set in 1997.

In Britain sales increased by 23%, in mainland Europe by 40% and in the United States and Canada for the first time more than 200 new Aston Martins were delivered to customers - an increase of 46% on the record set in 1998.

"These new sales and production records are a glowing tribute to everyone concerned" said Dr. Ulrich Bez Chief Executive of Aston Martin. "And this includes everyone working at Aston Martin, our suppliers and in particular our dealers who have capitalised on the success and sales momentum which we have generated. The DB7 remains the backbone of this success and this will continue in the future.

"The V12 Vanquish makes its world debut in Geneva but in the meantime our Sales and Marketing Group has organised a series of exclusive customer previews in cooperation with our dealers so that we can translate customer intentions into firm orders."

This is a 21-year+ news article, from our Aston Martin archive, which dates back to the year 2000.

If in doubt check with your local Aston Martin dealer as car prices and technical data will have changed since 2001.