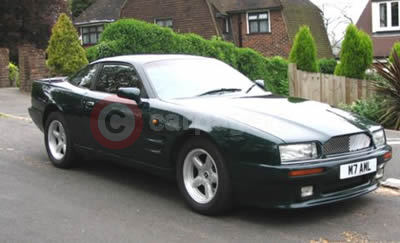 Bonhams will sell the 1995 Limited Edition Aston Martin Virage that World Heavyweight Champion Lennox Lewis has owned from new. The Virage - one of only nine models made to this specification - comes directly to the sale from Lewis and will be sold at Bonhams’ annual Aston Martin Sale at the company’s Works Service Headquarters in Newport Pagnell, Buckinghamshire on 4 June 2005.

Lewis ordered one of the final nine Virages to be built which incorporated subtle changes to the bodywork, engine and interior, and he had a new - and very powerful - sound system fitted. Other features requested by Lewis include TV, satellite navigation and seat alterations to accommodate his 6’4" frame. The car has been maintained by Aston Martin and has covered only 33,000 miles.

Born in London in 1965, Lewis was brought up by his mother who moved with him to Canada. At high school he excelled at all sports, but his talent for boxing shone through and by 1983 he had already claimed the world amateur junior title.

Described by George Foreman as, "beyond doubt the greatest heavyweight of all time", Lennox Lewis was certainly the undisputed world heavyweight champion between 1999 and his retirement in 2004. His record speaks for itself: 41 wins (31 of which were by knockout), two losses and one draw. Throughout his fighting career he gained, regained and retained WBC and IBF heavyweight belts - the most prestigious in the world. In 1999 he was awarded an MBE and was voted Sports Personality of the Year. In 2002 - the year he defeated boxing giant Mike Tyson - he was awarded a CBE.

When out of the ring, Lennox Lewis, while shunning the celebrity lifestyle, enjoys the finer things in life, and has had a life-long love of Aston Martins. This 1995 Limited Edition Virage is a car he has chosen to own and drive throughout the 10 years that saw him rise to the top and become heavyweight champion of the world. Estimate £30,000 - 40,000.

Aston Martin Virage Images may not be UK specification cars. Colours and exterior and/or interior elements may differ from actual models.