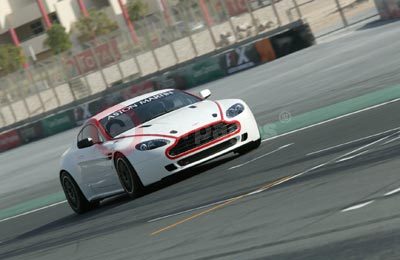 The Aston Martin Vantage GT4 has been under development for six months and was unveiled in Dubai this week by Aston Martin chairman, David Richards, and tested extensively at the Dubai Autodrome.

"In the last two years, the N24 has proved to be one of the most successful cars in its class; winning the Nurburgring 24 Hours this year, as well as several FIA GT4 races," said David Richards. "We have built on this success to develop the Vantage GT4, a competitive racing car for professional and semi-professional drivers, but also a forgiving car which will appeal to enthusiasts who wish to use it for track days and club racing."

The Aston Martin Vantage GT4 comes with either a manual or sportshift transmission. It is priced from £96,645 and is available to order now with delivery in January 2009.

Aston Martin Racing is now the only manufacturer to produce cars in each of the GT classes: GT1, GT2, GT3 and GT4.

This is a 14-year+ news article, from our Aston Martin archive, which dates back to the year 2000.

If in doubt check with your local Aston Martin dealer as car prices and technical data will have changed since 2008.

Aston Martin Vantage Images may not be UK specification cars. Colours and exterior and/or interior elements may differ from actual models.