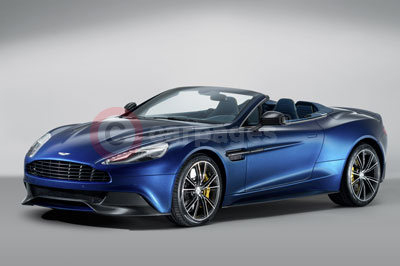 Aston Martin has unveiled the new Vanquish Volante, which is on sale priced from £199,995 with the first deliveries expected late 2013.

The Vanquish Volante is powered by the AM11 naturally aspirated 6.0-litre V12 petrol engine which produces 573 PS at 6,750 rpm with torque peak of 620 Nm at 5,500 rpm. Which will propel it from 0-62 mph in 4.1 seconds with a top speed of 183 mph; currently we do not have the fuel economy data or CO2 emissions. It uses a Touchtronic 2 six-speed automatic gearbox to transmit the power to the rear wheels.

You will find both carbon-fibre lightweight bonded aluminium structures under the Vanquish Volante all designed to improve stability and lower weight, technology which Aston Martin call VH (Vertical Horizontal) architecture, which is seen in the more aerospace than automotive. In fact the new Volante is 14% torsionally stiffer than the DBS Volante which it preceded it.

As you would expect there is Dynamic Stability Control (DSC) and Positive Torque Control (PTC) and an Adapative Damping System (ADS) which allows the driver to select three damping modes: Normal, Sport and Track, to match their needs.

It features the latest Brembo Carbon Ceramic Matrix (CCM) braking system which are fad restitant and lighter than normal brakes.

The Vanquish Volante wears a carbon fibre-skin, the first in the Volante's history to do so, which not only reduces weight it improves dimensions stability and to crave helps the elegant exterior.

It features a lightweight triple skin fabric hood which takes 14 seconds to retract. A lot of the styling cues are taken from the One-77 supercars with elongated side strakes and LED rear light blades.

The Vanquish Volante is a 2+2 seater which is covered in full grain Luxmil leather with optional quilting, metal controls and satin chrome trim. Unlike the Volante of before the new car features a 279 litre boot with either roof up or down - so no more sending your luggage ahead.

The centre stack is a direct descendent of the One-77 and features the familiar starting button and glass gear selection buttons with new easier to use infotainment system. The capacitive glass buttons are illuminated and have haptic feedback, a technology seen in mobile phones touch-screens.

This is a 9-year+ news article, from our Aston Martin archive, which dates back to the year 2000.

If in doubt check with your local Aston Martin dealer as car prices and technical data will have changed since 2013.

Aston Martin Vanquish Images may not be UK specification cars. Colours and exterior and/or interior elements may differ from actual models.