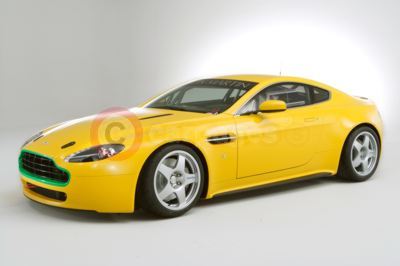 Aston Martin has confirmed details of its N24 race car, based on the critically acclaimed V8 Vantage road car, which will be showcased at the Autosport International Show this week .

The Vantage N24 is based on a standard European specification production V8 Vantage, with modifications undertaken to prepare the car for the competitive racing environment.

At the 2006 British Motor Show, Aston Martin Chairman and Chief Executive Officer, Dr Ulrich Bez, announced that the company would build a limited production run of cars based on the V8 Vantage that completed the Nürburgring 24-hour endurance race that June. The near standard V8 Vantage finished 24 th overall out of 220 starters, completing some 130 laps of the 15.77 mile circuit - in a field of mostly specialised race-homologated entrants.

The Nürburgring 24-hour race not only gives its name to the V8 Vantage N24, but provided a conclusive demonstration of its abilities; a near standard car capable of tackling the demands of one of the world's most arduous racing circuits.

The Vantage N24 subsequently went on to finish eighth overall in the inaugural 24-hour race of Bahrain in December 2006, again competing with highly modified race cars. During the course of the race, the Vantage N24 covered over 2600km, needing only fuel, brake pads and tyres.

With the formation of Aston Martin Racing in 2004, the company made a long awaited and successful return to international sports car racing firstly with the GT1 DBR9 in 2005 followed by the GT3 DBRS9 in 2006. However, the company also has a long history of racing near standard cars both at national and at international level. The Vantage N24 builds on this tradition - a factory built car proven and ready to race.

The Vantage N24 will be fastidiously hand built in a dedicated facility within Aston Martin's Gaydon headquarters. The level of detail and finish conforms to Aston Martin's exacting standards, fusing hand craftsmanship with advanced technology. The build of the first customer cars will commence in the coming weeks.

The Vantage N24's engine is modified to enhance throttle response and performance; including the crankshaft, conrods and pistons being lightened and balanced, the cylinder heads re-profiled to optimise compression ratio and gas flow and the engine management system is calibrated for race use.

The N24 is available with a 6-speed manual transmission only. A Valeo twin plate cerametallic racing clutch and lightweight flywheel complete the powertrain specification.

Aston Martin Vantage Images may not be UK specification cars. Colours and exterior and/or interior elements may differ from actual models.