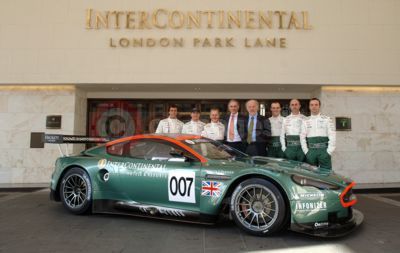 Aston Martin Racing today confirms its driver line-up for the 24 Heures du Mans race in June, which sees two new faces added to its team of established drivers. The team is also delighted to announce that the InterContinental Brand has further enhanced its sponsorship for the year 2007 and has become the official Title Partner of the race team.

“Our primary goal of the partnership this year is to continue to increase our engagement with the team and assist them in driving all efforts and resources on their bid to win the 24 Heures du Mans race,” said Vanessa Healey, global director of brand marketing for InterContinental Hotels & Resorts. “The talented drivers along with the race team’s passion for the sport and our commitment to their success will surely provide for a thrilling race at Le Mans.”

Experienced Aston Martin drivers David Brabham, Tomas Enge, Peter Kox and Darren Turner will be joined by Johnny Herbert and Rickard Rydell. Although both Herbert and Rydell are new to Aston Martin for 2007, they are no strangers to sports car racing and the gruelling Le Mans race.

“We have a strong driver line-up this year. All of the drivers have prior experience at Le Mans and four of the guys have driven the DBR9 extensively since its launch in 2005,” said Aston Martin Racing Team Principal George Howard-Chappell. “Although Johnny is new to our team, he is a Le Mans veteran, no-one can question his speed, he just needs to adapt to the DBR9. Rickard is well known to the team and has taken to the car extremely well.”

Howard-Chappell concluded: “We are expecting a tough battle at Le Mans again this year, the competition within the GT1 category is strong and we have to accept that with only one race this year we are the underdogs but, as ever, we will come out fighting. The DBR9 should be competitive and I know that the team and the drivers will all give 100% so let’s see if 2007 is Aston Martin’s year.”

Aston Martin has unfinished business at Le Mans having reached the podium twice since the British marque’s return to the world-famous endurance race in 2005. After leading for most of the race in 2006 the team were cruelly denied the top spot on the podium with a couple of hours remaining. The 007 DBR9 driven by Tomas Enge, Andrea Piccini and Darren Turner eventually finished second in the GT1 class, sixth overall. The team met a similar fate in 2005 and had to settle for third in GT1 class, ninth overall.

The team will attend the official test at Le Mans on Sunday 3 June 2007 in what promises to be a fiercely competitive GT1 class with 14 cars from five different marques.

The 75th 24 Heures du Mans is scheduled to start one hour earlier than usual at 3pm (GMT +1) on Saturday 16 June due to the French elections.