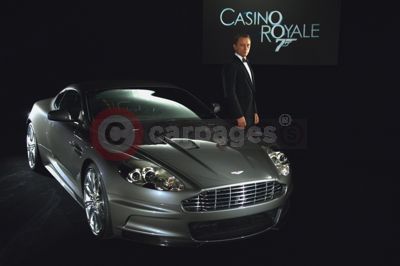 For your eyes only – visitors to Jeremy Clarkson’s mph ’07 prestige and performance motor show will be the first people in the UK to see and hear the brand new Aston Martin DBS in the live action arena this November.

The curvaceous supercar, which made its spectacular screen debut with Daniel Craig in the driving seat for Casino Royale, will be paraded in the show’s live motoring theatre. The spectacular action-packed live theatre show features stunts, demonstrations and hilarious commentary by Clarkson and mph legend, Richard Hammond. This unique format gives the audience a chance to hear cars like the six litre V12 DBS for the first time.

The eagerly awaited replacement for the Vanquish will be the latest in a long line of Bond cars to have appeared at the annual NEC and Earls Court motoring extravaganza. Last year precision driver Paul Swift successfully completed one of the most expensive hand brake parking manoeuvres ever, by sliding in between Pierce Brosnan’s Aston Martin Vanquish and Zao’s Jaguar XKR from Die Another Day.

mph Show Director, Lee Masters is delighted to confirm the first of a number of important debuts at the mph show, commenting: “To have the DBS making its UK debut at mph is fantastic news for our audience. It will be a rare chance for the majority to hear what its sonorous 510bhp engine sounds like and see it in amongst a feast of rare, expensive and powerful machinery. We will be announcing some other exciting model debuts at the show in the coming weeks.”

Four ticket types are available and cost between £33 and £89 and include entry to a 75-minute live action show, hosted by Jeremy Clarkson, Richard Hammond and friends. mph ’07 will take place 1-4 November at Earls Court in London, and from the 8-11 of November at the NEC in Birmingham. Visitors can expect the whole spectrum of prestige and performance cars from Maseratis to Maybachs and Porsches to Paganis. Tickets can be booked by calling the mph hotline number on 0871 230 0333 or by logging on to www.mphshow.co.uk.

Aston Martin DBS Images may not be UK specification cars. Colours and exterior and/or interior elements may differ from actual models.