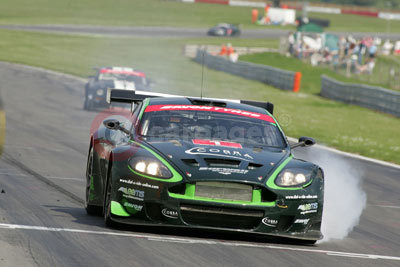 Chances are you didn’t spend it in the same way as Avon Tyres British GT Championship racer Jonathan Cocker who, this weekend, will celebrate his coming of age by racing a bio-ethanol-powered Aston Martin DBRS9 at speeds of over 170mph.

A year younger than Lewis Hamilton, Cocker, who lives in Guisborough, North Yorkshire, has already made motorsport history by becoming the youngest ever winner of the British GT Championship in 2004, aged just 18. He followed that up by taking Britain’s first ever victory for a bio-ethanol powered car earlier this year. This Friday he’ll turn 21 as he tests a monstrous 520bhp sports car at Thruxton in Hampshire ahead of the weekend’s round of the Avon Tyres British GT Championship. Despite him missing out on a more traditional celebration, Cocker isn’t disappointed.

“It doesn’t really bother me, being there racing on one of my favourite circuits is good enough for me. I haven’t been to Thruxton since 2004, I absolutely love the place, it’s a really quick track and the Aston should be good there.”

Cocker shares driving the Aston Martin with Minister for Defence Procurement Lord Paul Drayson and the duo are two of the favourites for victory this weekend in the pair of hour-long races that take place on Saturday and Sunday. Racing against Ferraris, Porsches and Lamborghinis, they’re on course to take a second win of the year and the championship lead at Thruxton. Even if they do, Cocker says that there still won’t be a massive party.

“I’m going to have to be sober as you like – I don’t think driving round Thruxton in an Aston Martin’s going to be good if you haven’t got your head together! We’ll probably do something afterwards, but nothing too exciting. I’ll probably just go home on Sunday night – it’s a six-hour drive back home! I’ll just have to wait until the next week.”