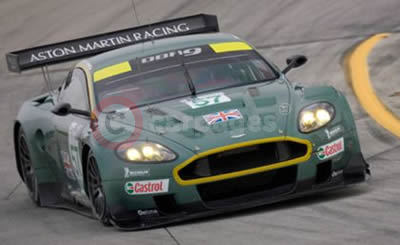 An ecstatic David Brabham, who took the chequered flag, enthused: “Aston Martin is back! This is just such a fantastic achievement for everyone involved in the programme. The team were just superb - to come here and beat such a strong Corvette team is a massive achievement for Aston Martin Racing.”

Car 58, driven by Peter Kox, Pedro Lamy and Stephane Sarrazin took 8th place in GT1, finishing 15th overall. However, the finishing position fails to do justice to the team who completed essential chassis repairs in remarkable time, allowing the car to rejoin the circuit in little over an hour after an earlier collision.

Stephane Sarrazin, who made his Sebring debut today the number 58 DBR9, said: “I found the circuit very demanding - the bumps make for really hard work. Our car is very fast - the team did such a good job to repair it so quickly and get it back to the circuit. We were just a little unlucky today, but it gives us great encouragement ahead of Silverstone and Le Mans.”

A victory at Sebring represents an extraordinary achievement in what is a test and development year for a brand new car and team.

Team Principal, George-Howard Chappell commented: “This is a fantastic result for us. Whilst we still have much work to do ahead of Silverstone and Le Mans, we can clearly be pleased with a win in our debut race against such established competition.

“Our primary objective here was for both cars to finish - anything beyond that was clearly going to be a welcome bonus.

“We’ve been encouraged by the reliability of the cars throughout our testing programme so far and the fact that they also had the pace to achieve victory here at Sebring is testament to the efforts of the whole Aston Martin Racing team. The whole team really appreciate the overwhelming support from the Sebring crowd throughout this week - especially given the strong home competition!”

Team Director, David Richards added: “This marks the beginning of a new era for Aston Martin.”

Aston Martin DBR9 Images may not be UK specification cars. Colours and exterior and/or interior elements may differ from actual models.