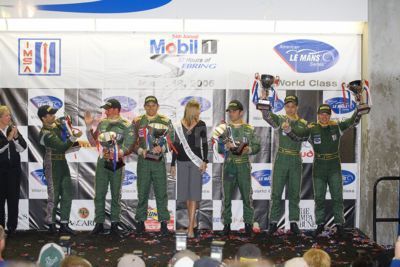 Tonight in Florida the Aston Martin Racing team finished the 12 Hours of Sebring endurance race in second and third place after a thrilling finale in the GT1 competition.

The team’s two Aston Martin DBR9s ran faultlessly throughout the race. Between them, the classic green cars, numbered 007 and 009, completed 661 laps of the 3.7 mile Sebring international raceway, covering a total of 2,445 miles at speeds of up to 168mph. Team driver Tomas Enge set the fastest GT1 lap of the race (1min 56.573.sec) in car 007.

The driving team of Pedro Lamy, Stéphane Sarrazin and Jason Bright brought Aston Martin number 009 home in second place, with a total of 337 laps, after a long battle with the class winning number four Corvette. After 12 hours of racing, the gap between the pair was 1min 28sec. The team’s sister car, number 007, driven by Tomas Enge, Darren Turner and Nicolas Kiesa, was involved in another transatlantic tussle with the second American Corvette entry that culminated in a nail biting battle to the chequered flag. Tomas Enge drove a double stint to finish the race third and keep the hard chasing Corvette behind.

The opening round of the 2006 American Le Mans Series (ALMS) started at 1045hrs in dry and sunny conditions. By midday the temperature of the 17-turn concrete circuit had reached 36°C. The Aston Martin Racing cars had qualified in first and second place but the early hot and slippery conditions proved tricky for both cars. With limited experience of their new Pirelli tyres, the team had to work hard and learn fast to keep up with the competition.

Darren Turner drove the first stint in the 007 car and held the GT1 lead for the first 20 laps. “I was happy with the start, we got away well and kept a nice pace for the first ten laps but by about lap 14 we really started to suffer with the rear of the car over-steering and by lap 20 I was more concerned with keeping it on track than keeping the opposition behind me.”

At the half way point, car number 009 led the team’s charge. After making adjustments to the set up of their DBR9, the driving crew of Lamy, Sarrazin and Bright reported improved balance and less of the oversteer that had caused problems earlier. Having completed 165 laps of the 3.7mile circuit, the 009 Aston Martin held third place in GT1, but slipped one lap behind the leader after being caught behind the safety car. DBR9 number 007 was fourth in GT1, but thirteen laps behind the leader after an incident on lap 121 forced a 20 minute repair stop. The car returned to the garage when the bonnet and part of the front wings, previously damaged in a spin, flew off as it negotiated a high speed section of the circuit.

Nine hours in, with 250 laps completed and headlamps blazing in the darkness, the team was second and third in GT1. A reliable and consistent performance from the number 009 DBR9, together with some mechanical problems for the Corvette ahead, helped move the red-nosed Aston Martin of Lamy, Sarrazin and Bright to second in class. After gaining a position in their own Corvette battle, the number 007 car of Enge, Turner and Kiesa was third.

In the closing stages of the race, the drivers of Aston Martin number 009 consolidated their second place, while in the 007 car Tomas Enge was locked in the battle with the number three Corvette. For the last ten laps the pair was separated by less than a second.

This is a 16-year+ news article, from our Aston Martin archive, which dates back to the year 2000.

If in doubt check with your local Aston Martin dealer as car prices and technical data will have changed since 2006.