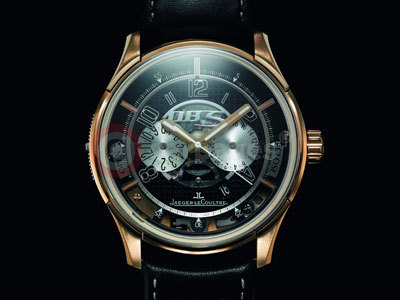 Aston Martin is delighted to announce, in conjunction with its watch partner Jaeger LeCoultre, the AMVOX2 DBS Transponder, the first watch developed with the ability to control access into a luxury sports car.

The watch, which will be showcased on the eve of the Paris Motor Show is a fusion of traditional watchmaking expertise and high-tech engineering. Crafted exclusively for owners of the Aston Martin DBS, the AMVOX2 DBS Transponder is yet another example that demonstrates the design and engineering collaboration between these two long-established companies; both leaders in their respective fields and partners since 2004.

By integrating the transponder circuit into the body of the watch, Jaeger-LeCoultre has created a timepiece that is entirely functional yet discrete, a masterpiece of miniaturisation and engineering that not only functions as a chronograph but as a key, making it the ultimate accessory for the ultimate sports car.

Only Aston Martin dealerships will be able to authorise the timepiece to ‘read’ and communicate with the owner’s specific DBS, ensuring that security and privacy are maintained at all times.

The case and dial of the AMVOX2 DBS Transponder are highly detailed, featuring a suspended metallic grey DBS symbol, a discrete Aston Martin emblem on the movement operating indicator and ruthenium grey bridges, satin finish and a black dial that all evoke the DBS's instrument panel. The outer dial ring also has an opening that reveals the internal mechanisms of the chronograph and transponder functions, an allusion to the exposed brake callipers visible behind the sporting wheel rims of the DBS car.

The AMVOX2 DBS Transponder watch is a landmark in chronograph design, a timepiece that works in true synergy with the most spectacular and elegant luxury sports car on the market. A true collaboration between engineers from two distinguished brands with a collective history of innovation and elegance, the AMVOX2 DBS Transponder is a modern timepiece that truly demonstrates Aston Martin's core values and Jaeger-LeCoultre’s mastery of high watchmaking..

Dr Ulrich Bez, Chief Executive Officer of Aston Martin said: “This is the definitive expression of the partnership between Aston Martin and Jaeger-LeCoultre, I’m delighted that we have been able to premiere this technology in such an elegant solution. It is the first time horology and automotive engineering have been combined in this way.”

Jerome Lambert, Chief Executive Officer of Jaeger-LeCoultre said: “This is one of the most exciting projects our team has developed in the area of functional innovation in watchmaking. The collaboration with all levels of the Aston Martin organisation has been deep and exhilarating, and no doubt this transpires in the breakthrough nature and design of the AMVOX2 DBS Transponder itself.”

This is a 14-year+ news article, from our Aston Martin archive, which dates back to the year 2000.

If in doubt check with your local Aston Martin dealer as car prices and technical data will have changed since 2008.