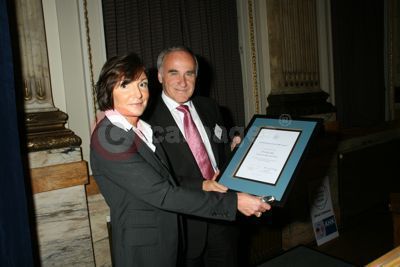 Aston Martin's Chief Executive, Dr Ulrich Bez, has been named as the German national responsible for making the most positive contribution to Anglo-German dialogue in 2007.    Dr Bez received the honour at the German-British Forum's Annual Awards ceremony in London on 11th October 2007.

Every year the German-British Forum rewards two individuals, a British national based in Germany and a German based in the UK, as part of its objective to increase the common ground between the two countries.   Previous recipients of the award include the architect Lord Foster, the conductor Sir Simon Rattle, the tennis player Boris Becker and German Foreign Minister Joschka Fischer.

The German-British Forum Award honours the seven years Dr Bez has spent as CEO of Aston Martin.  Since July 2000, Dr Bez has overseen the transformation of the company into one of the world's leading sports car manufacturers, a globally recognised icon and a symbol of British prowess in design and engineering. Aston Martin is based in Gaydon, Warwickshire, where a high-tech manufacturing facility sits alongside an award-winning modern office building and a brand new design studio. The state-of-the-art Gaydon facility epitomises Dr Bez's forward-looking programme for Aston Martin.

Dr Bez has had an illustrious career in the global motor industry. Prior to Aston Martin, he was responsible for overseeing the design and development of Porsche's 911 Turbo, 968 and 963 models, along with controlling the company's motorsport division. Dr Bez also held similar key engineering and development positions at Daewoo and BMW. Following his appointment to Aston Martin in 2000, Dr Bez has demonstrated an innate understanding of the manufacturer's heritage, history and unique place in British culture, and has built on these strengths to create a modern brand with timeless appeal.

Aston Martin is currently enjoying the most profitable and celebrated period of its 93-year history. Under Dr Bez, the Aston Martin brand has reached unprecedented levels of global recognition, winning the UK's prestigious CoolBrands Award for two consecutive years in 2006 and 2007. Aston Martin creates luxury sportscars with unparalleled design quality and a phenomenal driving experience. The current model line-up consists of the compact and sporting V8 Vantage and Vantage Roadster, the DB9 and DB9 Volante grand tourers and the flagship high performance DBS.

Dr Bez has also overseen the rejuvenation of Aston Martin's racing team, with the establishment of Aston Martin Racing and the creation of the DBR9 and DBRS9 race cars. 2007 saw the Works team triumph at Le Mans, finishing first in the GT1 class and fifth overall, while the N24 race car, developed from the V8 Vantage, finished first in class at the Nurburgring 6-hours race, with Dr Bez himself at the wheel alongside his team-mates.

With a sales network of over 120 dealers in 27 countries, including recent showroom openings in Beijing, Shanghai and Cape Town, and future models like the Aston Martin Rapide four door saloon, Aston Martin is perfectly placed to continue its role as a prestige manufacturer dedicated to innovation, design excellence and high performance. Under       Dr Bez's leadership, Aston Martin has become a British icon without equal, generating jobs, investment, prestige and recognition around the world.

Dr Ulrich Bez said:  “To be awarded this accolade and placed alongside such an impressive roll of previous award-winners is certainly an honour.  The growth of the Aston Martin brand has been consistent over the past seven years and I am pleased to have been able to play a part in its heritage.”